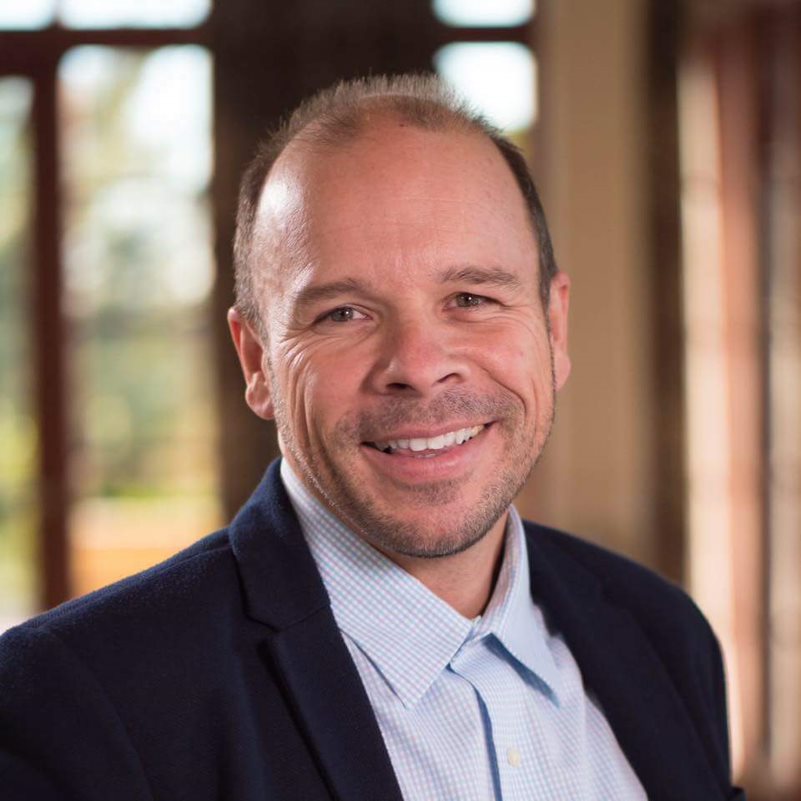 Claims automation. Touchless estimating. Straight-through processing (STP). These topics are top of mind for auto insurers looking to improve efficiency, reduce settlement time and enhance customer satisfaction by leveraging artificial intelligence (AI) in the claims process. Despite their interest, however, only 10% of those surveyed are making significant use of touchless claims while 97% acknowledge its value.

So why the disparity? Although the pandemic has accelerated advancements in virtual claims handling and opened the door to STP, there is still work to be done to deliver on the promise of a no-touch claim. As an industry, we are just beginning to reconcile initial expectations with the current state of the technology. So what better time to separate fact from fiction when it comes to STP?

Just a few years ago, AI was at the top of the technology trends list, giving the auto insurance sector high hopes in its ability to automate the claims process. At that time, LexisNexis Risk Solutions reported that 79% of auto insurance carriers were open to, or considering, the idea of touchless claims.

AI-enabled automation was becoming a reality. Machines could recognize the extent of the damage and whether a part should be repaired or replaced. Virtual estimating—considered the first level of automation—produced efficiency and consistency gains. From images, appraisers were completing as many as 15 estimates per day versus three to four out in the field.

Then sentiment shifted. Full automation was not as close to complete as the industry once thought. In fact, a 2020 Forbes article stated that most companies embarking on AI-led transformation had been disappointed. And while automation is designed to make settling claims easier, it was clearly not capable of replacing human appraisers.

In addition, essential elements of building an accurate estimate were lacking. For example, if you cannot decode a vehicle identification number (VIN) and uniquely identify the model’s options, how can you accurately predict what parts to repair or replace? Are you putting a bumper with sensors? What about headlamps? And if the part is made of a special material like aluminum, how should the repair plan differ? It also became clear that although AI could recognize the most important vehicle components, it needed to learn hundreds or even thousands more. 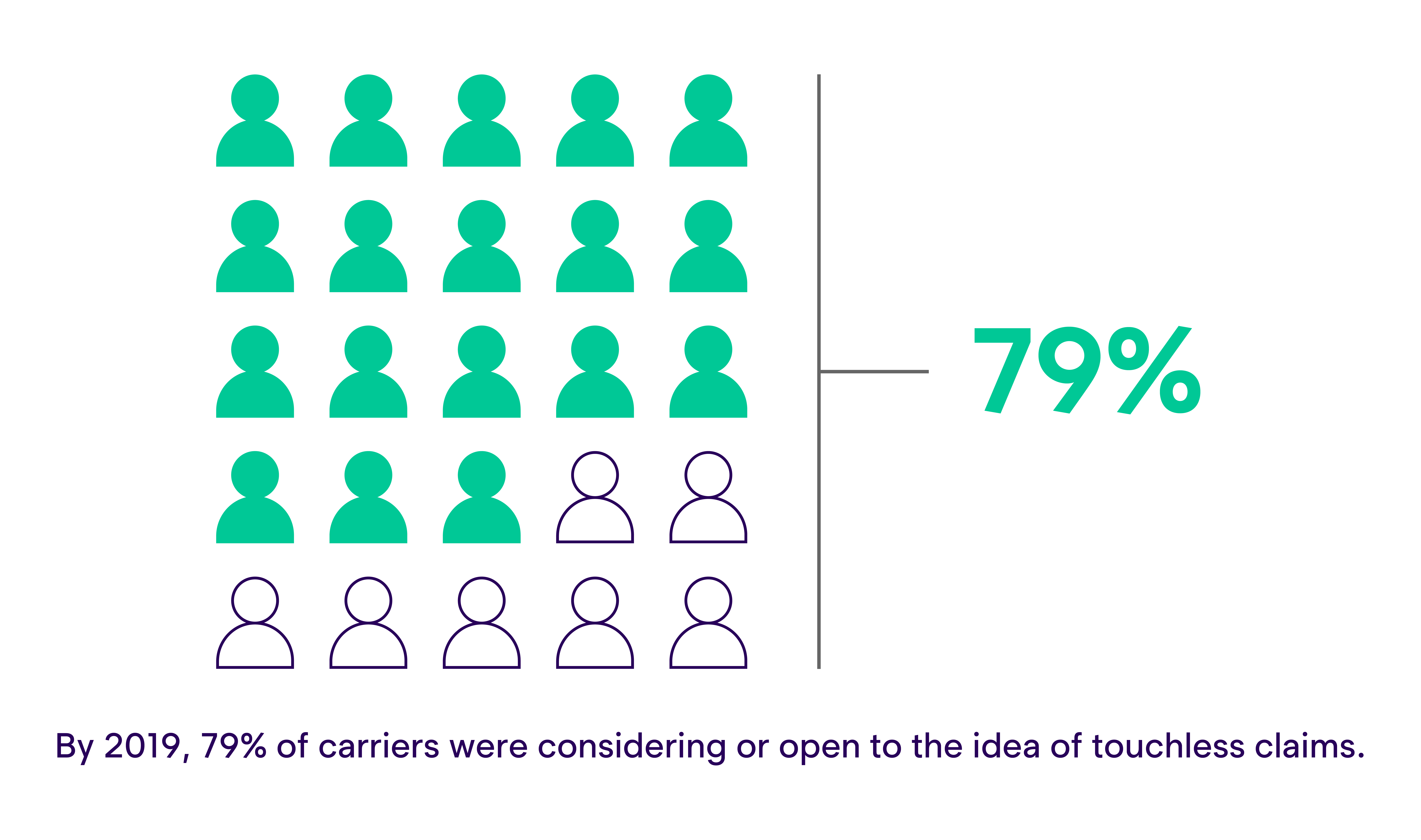 Another obstacle in using AI to do the work of human appraisers was the realization that humans do not process one image at a time or make decisions in isolation. Instead, they contextually review all available photos to understand the situation and the impacts on the vehicle before reaching a conclusion. AI, on the other hand, was not able to analyze multiple photos to determine unrelated prior damage. Adding to the challenge, human appraisers who had always completed estimates on their own were now asked to review and approve a pre-written estimate generated by AI—something they were not ready to embrace.

The result: claims automation sentiment went from hopeful to hopeless. Many organizations scaled back, moving their STP investments from operational objectives to research and development projects. They lost faith in touchless estimating and, instead, began to focus on more straightforward and realistic use cases for AI—such as triaging a claim or simply reviewing an already-written estimate (including for subrogation). Publications like Forbes also noted that although 87% of data science projects made it into production, “less than 25% of global organizations have developed an enterprise-wide AI strategy”.

While this could be cause for concern, shifting sentiment is typical of new technologies. To explain it, Gartner has defined the technology lifecycle in five phases. Known as the Gartner Hype Cycle, the phases begin with inflated expectations (Phase 1), peak based on a technology’s early success (Phase 2), and experience waning interest as well as disillusionment when implementations fail (Phase 3). That said, as the technology becomes more widely understood and its benefits clearly defined (Phase 4), mainstream adoption occurs (Phase 5). 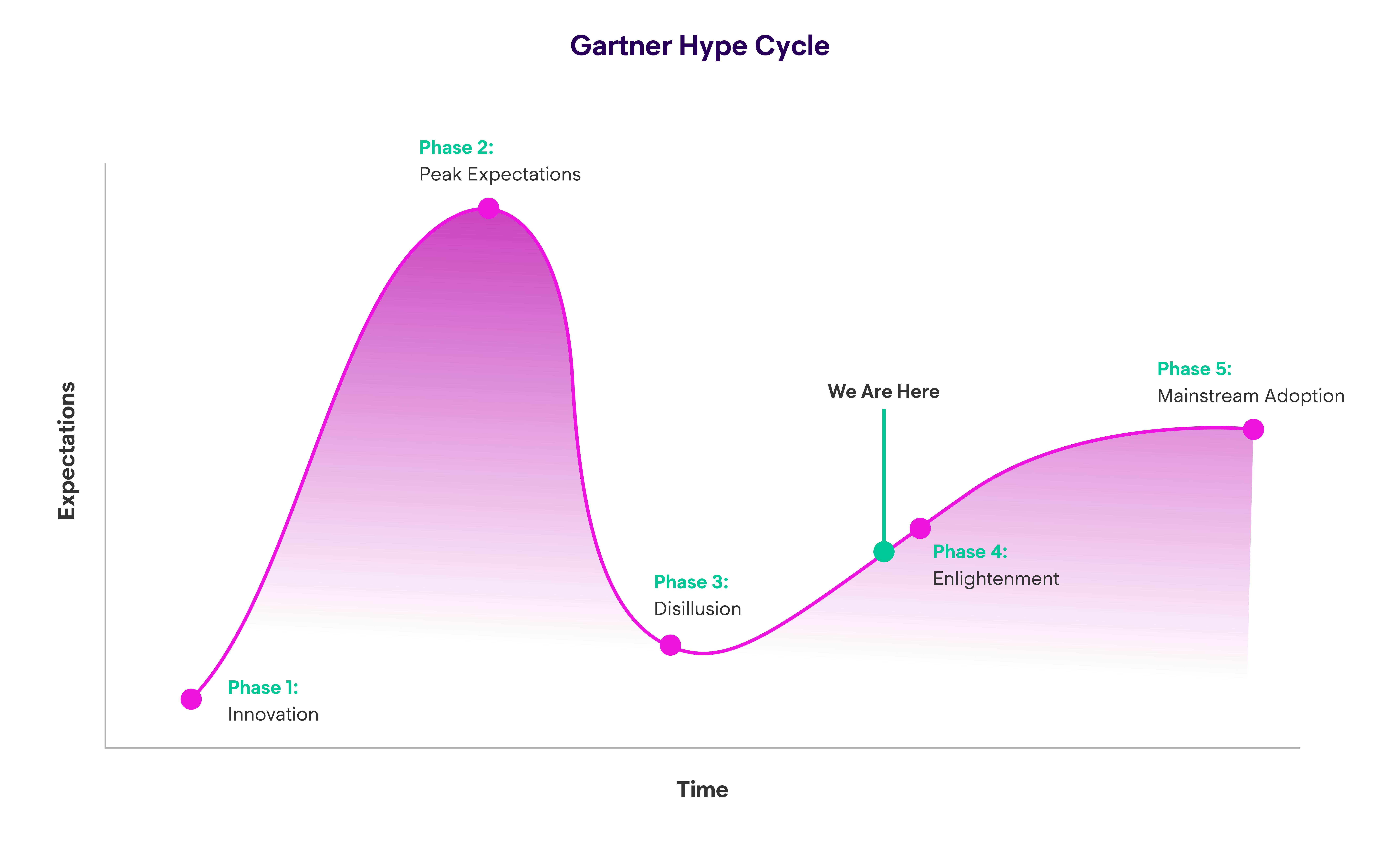 Although sentiment and hype surrounding claims automation have changed dramatically in just a few years, the technology has never stopped advancing. In addition, previous shortcomings have been addressed. For example, advanced AI solutions like Mitchell Intelligent Damage Analysis (MIDA) can predict more than 300 internal and external parts as well as provide recommendations for operations including repair and replace, remove and install, and refinishing and blend.

Furthermore, decoding the VIN and selecting the correct part have been accomplished, for the most part, by combining AI with vehicle information. For touchless estimating to produce an accurate appraisal, vehicle, repair and historical claims data are critical.

Going beyond OEM parts and incorporating recycled or aftermarket parts has also become a reality. This gives organizations a choice of part providers. Finally, AI can now correctly identify the primary point of impact as well as unrelated prior damage.

The Slope of Enlightenment

So where does the auto insurance industry stand on claims automation today? Recent studies and customer feedback seem to indicate that we have successfully passed the third phase of the Gartner Hype Cycle and are now entering Phase 4, or the slope of enlightenment. The key to this phase is realizing what is possible and how to put technology to use in situations that bring the most value. The creation of an estimate represents one use case for AI-enabled automation. Triaging and automating total loss claims are also very worthy candidates for AI. By 2025, LexisNexis Risk Solutions predicts that telematics data and AI will lead to 60% of claims triaged through automation. STP remains the vision. However, with only half of non-injury claims predicted to be fully automated by 2025, it is now considered a long-term goal.

With that in mind, how should we think about estimate automation? And what metrics should we track? In addition, since automation is a way to increase efficiency without compromising quality, is there a parallel path to STP and automating an estimate?

STP involves pre-populating as much of the estimate as possible and auto writing the lines with a high degree of confidence. That includes all operations, parts selections and pricing generated by AI using vehicle and claims data—with a focus on low-severity incidents. Once this data is captured and photos or videos of the damage analyzed, machine-learning algorithms translate the results into component-level estimate lines for appraiser review and approval.

To measure the STP technology gains made over the last several years, there must first be agreement on what metrics to track, such as how many:

Answering these questions will lead to a single, measurable indicator known as the North Star metric. For Mitchell, that metric is the efficiency gains delivered by automating the estimating process. Given its overarching objectives, STP is ultimately a function of the percentage of estimate lines that correctly auto-populate—producing critical time savings and, in turn, higher customer satisfaction.

While Mitchell’s open platform integrates with the industry’s leading AI, our own AI—MIDA—has demonstrated substantial gains over the last year with a 16% increase in the percentage of estimate lines correctly auto-populated. Continuing to fine tune MIDA’s algorithms has also resulted
in year-over-year improvements of:

These improvements demonstrate just how rapidly the technology is advancing and how much progress has occurred in a short period of time.

Although STP is a fundamental goal and certainly the long-term vision, it is just as important to realize that manual appraisals and human judgment remain key to the estimating process. For severe accidents or claims related to the newest vehicles, appraiser involvement still yields tangible business benefits, like preventing cost leakage. Therefore, optimizing the core estimating solution to enhance the user’s experience continues to be a priority. This may include surfacing the right photos at the right time, engaging an appraiser when there is ambiguity in the part selected, or even prompting a “real” person to confirm what the machine may not be certain of.

Claims automation has demonstrated that it can deliver significant benefits to both auto insurers and collision repairers. Among them: improved appraiser productivity, greater estimate consistency, enhanced policyholder satisfaction and faster settlement times.

As the technology advances and industry stakeholders look for ways to harness its true value, it is important to remember that:

And while organizations have many choices when it comes to technology providers, partnering with those that offer an open platform and integration with best-in-class AI will help future-proof any claims automation project—allowing businesses to easily scale when, and if, they need to.

The Future of Paintless Dent Repair

Learn how this eco-friendly repair method is gaining support, underscoring the need for technology, training and professional standards.

Electric vehicles (EVs) are making the transition from novelty to necessity. As EV adoption continues to grow, auto insurers and collision repairers must prepare for the impact on claims processes and costs.

As an industry, we are just beginning to reconcile initial expectations with the current state of claims automation. So what better time to evaluate our progress and the road ahead?

Prescription Drug Monitoring Programs (PDMPs) are electronic databases designed to track and monitor controlled substance dispensing. These databases are run at the state level, and the main intent of such programs is to screen for suspected drug diversion (i.e., using drugs for illegal purposes such as selling prescribed medications for profit) and abuse.

If Over-the-Counter Meds Are Prolonging Pain, What Does This Mean for Workers’ Comp?

Is it time to change our relationship to NSAIDs, like Advil? What are the alternatives?

How are seizure drugs used for pain management in workers' comp? Opioids are often prescribed for moderate-to-severe pai